Limited Grace is a lyrical hitchhike expedition through a psychedelic rural universe where time is nebulous and navigational tools are frowned upon. Through words, voice and sound, Gillig take us through cosmic swamps, ghostly clearings, mountain tops at night without a tent, shacks built along riverbanks but without running water, and dark desert highways soaked in silence except for the sound of a gas tank running on little more than fumes. Using the imagery of small, concrete moments, he tells us unique yet epically familiar stories without the frills of any particular plotline.

While his first release, Cave Trilogy (FTR 188), was a 3LP set of songs recorded solo under a bridge, this is a more honed effort to take that same rawness into a studio and build on it while maintaining its authenticity. With contributions from friends like Matt Valentine, the FDOME collective, and other members of the Turners Falls music community, this effort is decidedly fruitful. Whatever qualities might have been lost while emerging from under the bridge, are replaced with musical elements that bring all subtleties to light. Well-placed backing vocals, sludgy yet swirling guitar leads and minimalist organ are the sparkplugs and pistons on Gillig’s likely unregistered vehicle as he shows us all-points-off-grid.

Many of these songs would not sound a bit out of place if they somehow found their way onto an Alexander “Skip” Spence album or a collection of Warren Zevon demos. At times taking the offbeat elements of Spence or Zevon a step further, at other times more straightforward, boldly reminiscent of early Dylan or Townes Van Zandt. Bryan Gillig’s Limited Grace is an artisanal demonstration of song craft and sensibility that is not so much forgotten as rarely attempted, let alone successfully. 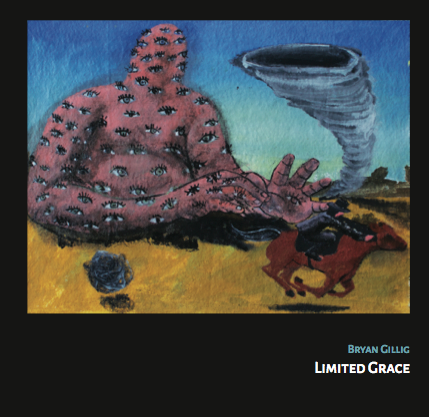