A few years back, Bryan Gillig was the frontman of the great Turners Falls MA band, Loudville. Plans were broached for a record, but nothing ever worked out and Loudville quietly devolved into pumice. A while later, Feeding Tube’s Mr. Lee became enamored of a cassette of songs Bryan recorded in his car. Before anything could be done with that, however, Bryan reported back that he had recorded most of his repertoire under a bridge, by the banks of the Connecticut River in Turners. It was a lot of stuff, but it was fucking cool, so here ya go.

Bryan’s songs are nearly open-form in spots, and sometimes push against the bounds of known völk traditions. In other places, his approach recalls bits by the early ’70s New England troubadour, Jaime Brockett. There are even points where his attack is reminiscent of Roky Erickson, circa The Holiday Inn Tapes. For an approach as minimal as Gillig’s, he manages a surprising amount of variety on Cave Trilogy. The vibe is akin to being invited to enter a van full of smoke, only to discover that a river runs through it. Quite amazing in a low-key kind of way.

The three albums ebb and flow with a rhythm as natural as the watery backdrop for the recording session. Some of the tunes are tight as John Sebastian’s hat, others ramble like Vince Martin wasted on reds. Together, they form a full afternoon of toasted deliciousness. It’s almost like stumbling across the long-lost solo recordings of an ex-member of Spirit in the Flesh (Turners’ legendary commune band of ages past).

If you don’t dig this one, you’re definitely clenching too tight. 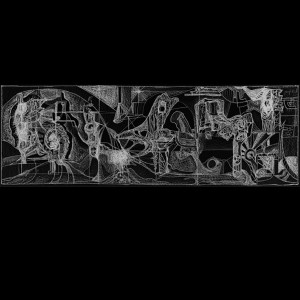