M2 is an East Coast-based duo comprised of two of the legendary Miller brothers, namely Roger and Ben. They have previously appeared together in such bizarrely protean ensembles as Sproton Layer and Destroy All Monsters, but they are probably best known for their work in autonomous formulations. Ben, most recently with the Glenn Branca Ensemble, Roger with Mission of Burma (and all who sail with them). The music on M2’s debut LP, however, is far from any of the rock-related moves with which they’ve associated in the past. Both have serious bonafides in experimental/improvised sound, of course, but these take a new leap with At Land’s Edge. Roger is playing heavily prepared piano – something he has been obsessed with for many years. And Ben is handling an electric guitar with more modifications than anyone can easily count. The eight pieces they have created for At Land’s Edge are entirely improvisational. But their sophistication and organization belies their purely aleatory roots. Indeed, the textures they create for their music buggers the very notion of piano/guitar interplay, substituting a shifting array of percussive and electronic field signals that recalls the smaller-format work of Italian improvisational units such as MEV and Gruppo di Improvvisazione Nuova Consonanza. An LP of pure wonder, At Land’s Edge represents a beautiful challenge for adventurous listeners. Exquisitely recorded by guitarist Michael Bierylo, the album is a monster of form confusion, and we can’t wait to catch the duo on tour. Dig it.   – Byron Coley 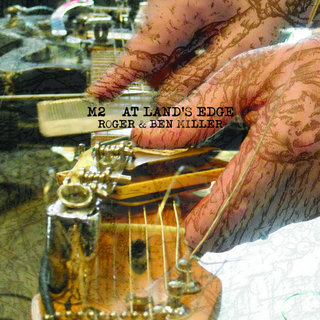