Three hot chunks of explosive improvisation fill the debut LP by Los Condenados, one of the Boston area’s most resolutely form-destroying units. Blending electronics, woodwinds and vocals into searing blasts of audio-thuggery, Los Condenados create a gibbering racket that sounds like a collaboration between Voice Crack, the Synder/McPhee Duo, and Schimpfluch. Andrea Pensado, an Argentinian expatriate (by way of Poland’s Krakow Academy of Music), handles laptop and vocals. Her voice contains some of the birthing-terror described by Yoko Ono, but manages to fit itself into treated-packaged-sequences rather than long-form squack-yodeling. Her laptop work is the essence of beautiful noise. Jules Vasylenko plays invented woodwinds — bamboozle sax and trombax — with furious circular logic that makes him sound like Foghorn Leghorn screaming while bobbing on the ocean in a little raft. Walter Wright (who runs Lowell’s 119 Gallery, where the first side of the LP was recorded) is a fascinating electronics-fiddler as well. Small shrieking events pour from his set-up like bronco worms. The results have a riveting post-form logic, filled with small events that haul yr attention in, unlike many other abstract excursions we could name. The three pieces on Yeppers were recorded live in Eastern Mass, during 2011 and 2012, and they will stroke the underside of yr taste-receptors so lovingly you’ll want to lick the damn record. But keep yr tongue-socks on, sport. Music is for listening. Not eating.
-Byron Coley, 2013 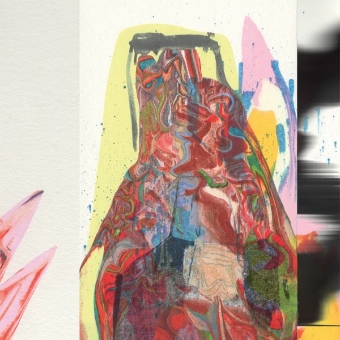