“Don’t be so shy man, just come an’ meet the Pi-Man” The crown jewel in the feeding tube catalog. The music on this record was recorded from 1981-1985 as the conceptual soundtrack for computer games released on cassette by the British software house Automata U.K. Ltd. Combining primitive synthesizer tones and meandering psychedelic blues guitar with cryptic, off-color lyrics about the multi-colored Piman and his pals, this is unlike any other “computer music” you know or have imagined. It’s like finding a great lost electronics LP by ‘80s NYC underground legend, Copernicus, or something. A bizarre and unique trip. Ultra thick gatefold, comes with cut-out mask, extensive liner notes and poster. “This album represents a bona fide artefact exhumed from the age, and imbued with the spirit, of hypnagogia. While retro-futurists like James Ferraro and Daniel Lopatin refashion the cultural debris of their adolescent pasts into fresh meditative forms, here we have a taste of the genuine article, with a side salad of saucy seaside humour thrown in”. – – Spencer Grady of thequietus.com Download the Pimania press kit 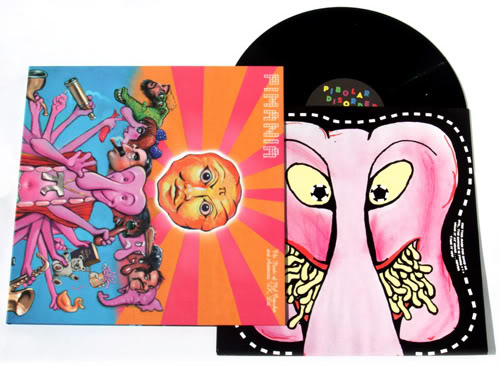