Released in foreshortened single LP format back in 2010, the new edition of this masterpiece of Brattleboro form manipulation is allowed to breathe across two full long-players, and we’re all a lot better off for it. Allowed to sprawl across a couple of albums, a booklet of text and a download card of yet another album, HJFB achieve a rare freedom here, assembling a complete imaginary universe that combines surrealist wordplay with woozy Dunedin-style form-grabs. Composed of seven (or so) people (it changes with the weather), the band seems capable of almost anything. At one moment they can be doing what sounds to be a flamenco version of the Germs’ “Lexicon Devil” then turn on a dime and resembled the Terminals doing one of their death-chug-sea chanteys. It’s weird, this Brattleboro thing. All the bands there sound pretty different from one another, but they all sound like they smoke cheeb as though it was legal. There is a stoner logic to Complete Hotel that’s so damn wonderful it’ll just about suck yr clothes off. As was demonstrated to the world on their Mexican Summer comp (which was in print for what? three hours?) HJFB out songs together in a way that pleases them, and damn the torpedoes. You can hear traces of absolutely anything inside their sound — Four Seasons, Van Dyke Parks, Dave Davies, Plagal Grind — but their mutational heat is so heavy, after you’ve dug a few notes you realize it could never be anyone but them. Complete Hotel Double Tragedy is the first time HJFB have gotten a chance to expand in all directions at the same time. And it is so cool you’ll grow a new tit. We promise!
-Byron Coley, 2013 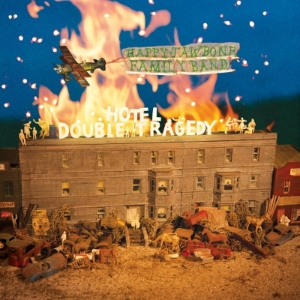