Edition of 200
The doors to the clown car open once again, and we are faced with a new release by Egg Eggs. David Russell’s stream-of-vom lyrical inventions are as crafty as always, and Vanessa Brewster’s vocals provide a nice balance to them on the first side’s suite, “Dairy Farm Days”. Balance and contrast on the flip, “Inside the Mountains” is provided by Klyd Watkins (of Poetry Out Loud fame) and Jenifer Gelineau’s reborn-hillbilly fiddle. The contrast between these approaches emphasizes the theoretical hook of this album’s construction. Just as The School LP by People’s Victory Orchestra and Chorus (1972) was broken into the Boy’s Side and the Girls’ Side, so Taste of Sundress has its fluidity defined by the Mason-Dixon Line. Indeed, the first side is a session of Northern origin and texture, recorded in Massachusetts by Justin Justin Pizzoferrato, featuring such doughty Yankees as John Moloney and Sam Gas Can. The Southern side was done in the Nashville area with Bob and Klyd Watkins at the helm. And the difference between them is palpable, if not as easily pegged as it might be. The reason for this form-smudge is the constant irreality provided by Mr. Russell’s always stunning vocalese. Singing about cows and clowns for the North and about caves and crisis for the South, David’s philosophical stance generally appears as an engine of nada, and the music everyone creates in reaction to this flows like black bubbly lava. There are no slaves on this record. And the price of their freedom is your cost to bear.
–Byron Coley, 2013 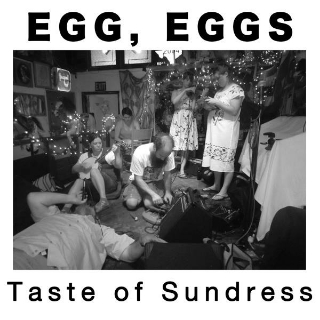