Anthony Pasquarosa is one of era’s most mutable performers. His first solo LP, recorded under the soubriquet Crystalline Roses, is an ingenious post-volk blend of acoustic feverings. Bur he has been equally active as a member of the hardcore trio Aerosols, the post-form fuck-duo SQRM, and Josh Burketts’ trad-folk unit, Frozen Corn. A regular customer at the store, Tony walked in with this demo one day back in 2013, and we were immediately smitten. His sonic vision included weird science fiction and a thug brevity worthy of Mick Farren’s Deviants or Michael Moorcock’s Deep Fix. The music was brutal space metal and the lyrics were the same. It had been a long time since we’d heard their like, and we immediately signed the man up for an LP. This issue — with all its glitches — is what we were struck with that day. In the meantime, Tony has assembled an actual World Domination band, with Andy Crespo on bass, Jeremy Pisani on Guitar, Andrew McCarthy on Drums, Todd Schmeling on Chaos and Mr. Pasquarosa on Guitar and Vocals. They have blown down faithful fans at several shows already, including a spot opening for Hawkwind’s Nik Turner , and one can only hope their blast expands from here. 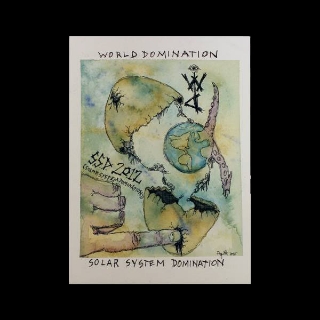