OUT OF PRINT – 2nd pressing out early next year.

Just what you need in these end times – Cardinal Fuzz (Europe) and Feeding Tube Records (N.America) – A vinyl issue of the killer CD comp that SS Records released way back in 2004 with a couple of added treats. Brace yourself for some steller  hair singeing full throttle wipe outs across 4 slabs of heavy black vinyl. Comes with a folded A3 double sided insert.

Monoshock was one of THE best bands of the 90s and if they were from Seattle and not Illa Vista & Oakland, California you would already know that. During their six years they released a handful of 7″s, served as a backing band for Von Lmo, and created one of the classic psych albums of all time, Walk to the Fire. In the last few years they received praise from around the globe, raved up by Julian Cope as one of the great unknown bands of the 90s and cited as an influence by current heavy faves, Comets on Fire, as well as a whole slew of Japanese psych bands. Monoshock is fuzz-fuel, wah-wah damaged, riff-crazed punk rock which draws in Hawkwind, the Stooges, Simply Saucer, and other psych-punk gods. This double LP collects all their 7″s and comp tracks together with 7 previously unreleased tunes and two songs from their ultra-rare 1989 demo tape and 2 added digi bonus Live tracks from their reunion shows. Fans will be overjoyed. Virgins will become fans.
The band’s stellar Walk to the Fire has been acknowledged as one of the classic psych albums of all time.

I knew about Monoshock when they were around, but I never actually heard ’em. Years went by. Then, Comets on Fire started exploding, and it was very good, but on the internet one music fan said “Comets are great . . . but they’re no Monoshock.” That was it, I had to hear these apparently mighty forefathers, and I immediately rushed out to my favorite used record store, where, as fate would have it, they had the Primitive Zippo 7-inch used for a whole entire two dollars. Back home listening, I could definitely see where Comets might have been taking some notes. After playing it on the radio a couple times I filed away the 7-inch. Almost two more years pass, and I’m listening to this new definitive Monoshock CD that compiles Zippo (which turns out to be their debut release) along with their other two 7-inches, 2 comp tracks, 2 tracks from their demo (which I guess is their true debut release), and another 5 tracks that are previously unreleased. And now I can see where Comets might have taken ALL of their notes. An important difference is that Monoshock can and do get as full-on freaked out as Comets always are, but they can also really lay back and get shaggy and let the weird stuff slowly creep up all over you until you go to scratch an itch and find that you’re covered in some sort of weird sticky green space-muck! Actually, the liner notes to this CD really put the Monoshock sound in context by referring to it as “SoCal beach grunge,” pointing out that the band, who I always thought formed in Oakland (California), actually were from the “decaying beach town” of Isla Vista (California, pop. 18,344). (Oakland came later, when they all ended up there and started playing together again.) Right there it all clicks: surf, decay, grunge, partying, and the result is every bit as deserving of the 90s grunge freakout crown as their more famous and slightly better-mannered contemporaries up north, Mudhoney. S-S Records have worked pretty hard on the mastering of this retrospective, and the songs jump out and sound great and alive while (thankfully) still sounding like they were recorded inside the world’s smallest sardine tin (i.e. a San Francisco basement recording studio called The Insane Cat). “Nobody Recovery” really puts me in the zone — so in the zone that I didn’t even notice it was an instrumental the first two times I played it! “Halloween Party” has funny vocals coming from all over the place. “Burn My Eyes” is a Radio Birdman cover that scorches more than the original IMO. “Soledad” has lyrics so good they supply the comp’s title and also are quoted at the beginning of the liner notes: “Runnin’ ape-like from the backwards superman / Gunny sack in your gnarled hand / Here comes the rocktus-cocktus otto-man! / Resurgence from your slimy can / Livin’ like a freakin’, tweakin’ meco-man.” Throughout the whole alb I’m diggin’ Grady Runyan’s “wall of wah” guitar, for sure, but when you hear this many songs in succession, Rubin Fiberglass’s trance backbeat really comes to the fore as well. Groovin’ cover of “Psychedelic Warlords (Disappear In Smoke)” with hilarious Casio-type keyboard leads. Previously unreleased track “Terminal Roctus” might have more animal noises than the entire LP of Contact High With The Godz. The last track, “Destination: Soil,” is the youngest of their efforts on here, from a 1989 living room Isla Vista demo session, but it sounds pretty ‘mature’, almost 7 minutes of super-thick and patient melodic drone rock that just never stops burrowing. Well, that’s a few highlights, hear the rest for yourself! A truly great band. (“Hawkwind Show” is a current hit on your local left-of-the-dial radio station.) – “BLASTITUDE – www.blastitude.com/17/RECORDS.htm”

I’ve been praying a silent prayer every evening before tuck-in that someone would take it upon themselves to collect MONOSHOCK’s 45s and miscellaneous odds/ends onto a CD, but never in my deep talks with the Lord did I imagine the results would come out this tip-top. Before diving deep into this excellent 1989-95 overview of one of America’s hottest lost 1990s “local” bands, some disclaimers & a little history. My personal involvement with Monoshock goes back a ways, so for me to pretend there’s zero connection between us would be more than a tad disingenuous. I will say that I’ve had nil contact with anyone in the band for several years now. I took it upon myself to post an unprompted yet non-maliced warts-&-all discussion of Julian Cope’s experiment in extreme Monoshock hyperbole 18 months ago, pretty much the first real post on this site. I put some distance between myself and a subjective view of the band’s music a long time ago, and I think I can, in 2004, critically approach this CD as a non-jaundiced fan might.

That said, after reading the liner notes by “The Captain”, which provide a terrific overview of Monoshock’s life story, the dots began to reconnect. I played – OK, sang – in Isla Vista, CA’s UMBILICAL CHORDS in 1988 with a pre-Monoshock Rubin Fiberglass & Grady Runyan, and because I was a whiny 20-year-old purist of some sort & tried to keep their band rooted square in a dead-end fast/loose/hard Lazy Cowgirls-esque direction, I happily assisted in driving those much more visionary & talented gentlemen from the Chords, whereupon they created the more expansive proto-fuzz Monoshock that summer. Monoshock quickly became one of those rare bands that one sees live repeatedly not because your friends are in the group, but because they’re really, really good. Later, hard feelings assuaged, I played/sang in a 1989 one-time-only tribute band to the awful Mystic Records hardcore compilation “We Got Power” called, you got it, WE GOT POWER, featuring all three members of Monoshock + me decked out in our finest Ill Repute/Willful Neglect wear. Still later, after the band had broken up & reemerged in 1993 in the San Francisco Bay Area, I put out their first 7”EP on my exceptionally short-lived label Womb Records. All three tracks from that CRIME/CHROME-damaged 45 kick this CD off in screaming fashion, and that’s where the REAL story – the interesting one –begins.

The first thing you notice if you were at all familiar with this band is that the remixes of what were some of the dirtiest, filthiest, most buried SOLGER-esque rock recordings ever are now hot, frothing and bursting off the laser to grab you by the lapels of your fine Dacron ensemble. Now how did they do that? It’s a stone-cold miracle; the transformation of these crud-encrusted recordings into items for home fidelity systems are akin to a radical Queer Eye intervention. The band’s first three 45s are here, along with their two comp tracks and loads of unreleased gems. These sons of VOM are three of the most clued-in musical minds I’ve ever met or observed, and they breathed in and coughed out a whole host of killer influences. Starting with the most obvious: Hawkwind, The Stooges, Can, Black Flag, Pere Ubu, Pink Fairies, Von Lmo, the MC5, and Chrome. Later in their flickeringly brief career they trended more toward heavy Japanese-style PSF psychedelia and outré space rock experimentation a la F/i, Vertical Slit and any number of barefoot Germans from the 1970s. I’m not sure where they’d have ended up had the band not petered out in 1995 – it appears from the direction they were trending on the LP/CD “Walk To The Fire” that it was into a heads-down, dark & deep spastic noise murk rather than back to the bull-rushing primitive fuzz-punk squeal of these earlier recordings.

The revamped, post-college MONOSHOCK were the great white hopes of Bay Area sub-underground rock for about a year; the few of us that closely followed their comings and goings, best captured on those three loud-as-fuck 45s, were flat-out convinced that they were one big Forced Exposure write-up or one big WFMU endorsement away from selling the nation on their considerable charms. It wasn’t to be, and it was frustrating for lots of reasons. One of them may or may not have been related to the band’s motivation declining in an inverse proportion to their moderately ascending popularity. I could be way off base here, but Monoshock tended to wander off the reservation of coherence frequently enough that self-sabotage has to be considered as a worthy theory for salon discussion. That way they could remain fully sub-underground and in so doing, ensure they’d be so in there’s no chance they’d ever sell out. Witness the uncoached “special musical guests” on tambourine or sax who snuck in, stuck around and somehow became unofficial band members. Or how about weed-baked tracks on the CD like “Terminal Roctus” and “Cabalgando a la Luna” (as my pal RW said, when was the last time you broke out “Fuck That Weak Shit, Volume 3”, from which this emanates?), which, well, if you’ve got another word for self-indulgent, I’m all ears.

But this unpredictability and spontaneity was much more frequently a source of strength. Even way early on, Monoshock let plodding thud monsters like the 1989 demo that closes this CD, “Destination: Soil”, break out into impromptu, freakish, extendo Big Muff jams that left half the party in rapturous awe & the other half passed out on the floor. Grady Runyan was and remains a destroying guitar player, a guy who has done as much with distortion and pedal-based chaos as anyone has the past 15 years. Likewise Scott Derr (on the 1989 stuff) and especially Rubin Fiberglass (most of the 1993-95 tracks) were top-shelf vocalists; Fiberglass in particular had a snot-assed delivery that sounded like the gutter stepchild of Darby Crash and the McDonald brothers. This CD conveys their unrestrained powers far more cohesively than even most of their live gigs did, and with a far better mix than any of the vinyl that preceded it. It’s one that’s worth playing repeatedly and which’ll deservedly make them a whole lot more friends in the afterlife than they garnered in the here and now. Kudos to S-S Records for making the release happen & to Monoshock for allowing it to. (Agony Shorthand – agonyshorthand.blogspot.com/2004/09/monoshock-runnin-ape-like-from.html) 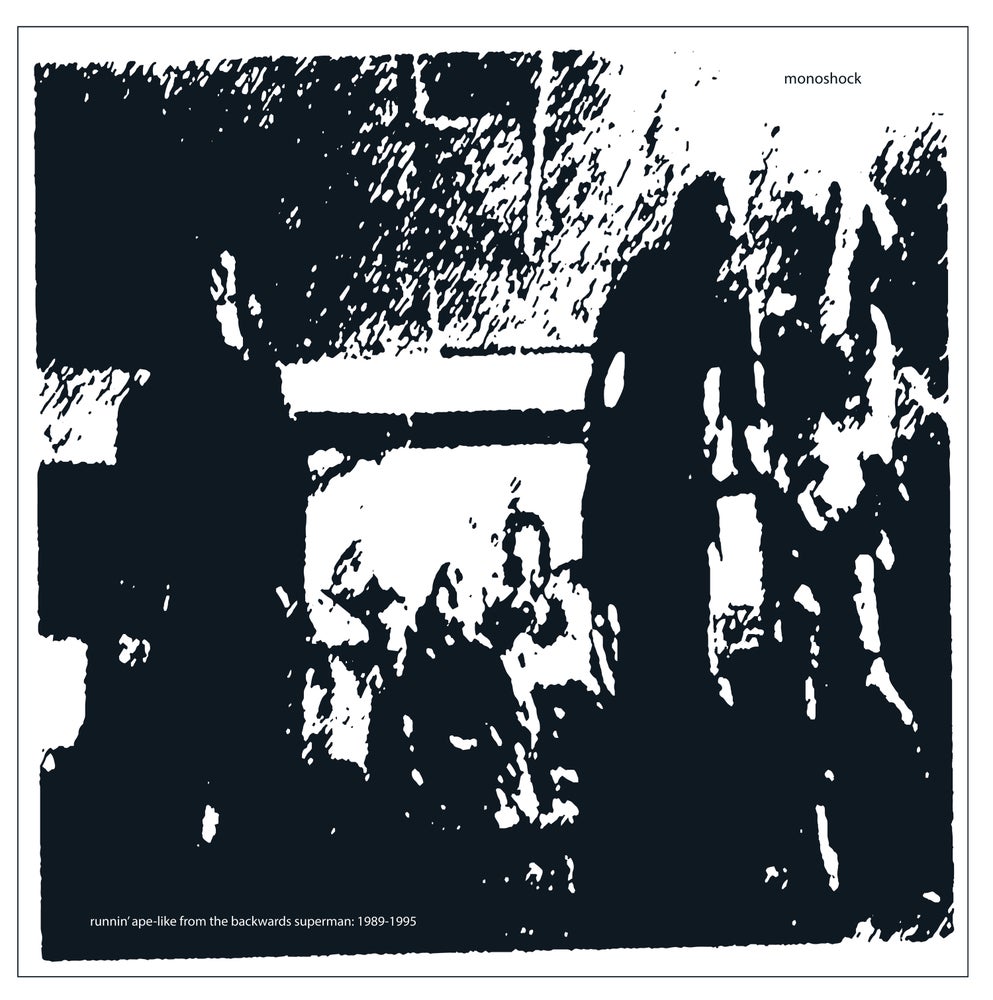