Because he is a relentless seeker of strange truths (especially as they relate to music), Nigel Cross was the gent who uncovered the fact that the London-based artist, Jill Tipping, had been a member of a Sunforest-style folk-rock group back in the day. Further investigation uncovered information that the band had actually recorded some material and these tapes had not been lost! Pressing his case, Nigel got his hands on said tapes and came up with a proposed LP. We were excited when he asked us to participate in the project, and this lovely album is the result.

Here are some notes from Jill on what’s what.

It’s early ’70s London and in a small all-girls grammar school a band is born. There had been an extant group of sixth-formers – The Folk Group – who provided musical filling at morning assemblies and religious services, but they were moving on. The spot became vacant, so up stepped Janice, Kim, Lesley and Jill, with Barbara for moral support.

Like many teens at the time they had guitars and teach-yourself books, so they started strumming their way through religious songs, folk tunes and Beatles songbooks and attempted the music that was all around them. Some was pop charty —  Monkees, Kinks, Faces; some was folky — Pentangle, Steeleye Span, Simon and Garfunkel; some rocky — King Crimson, Pink Floyd, David Bowie; some singer/songwritey — Cat Stevens, Joni Mitchell and Elton John to name but a few.

But why should the likes of Carole King have all the fun, writing her own material? Janice was moved to put pen to paper and started scrawling out lyrics with no idea of how to get her hummed tunes down onto paper. Well, Kim actually had a great musical education and played violin and piano. So the two sat down together and worked out the guitar chords to share with Lesley and Jill who helped by adding vocal harmonies, recorders and percussion.

The quartet played in their teen bedrooms,  as well as a couple of churches, school assemblies and events. They also had a very small taste of fame in the shape of an appearance on London education TV, which earned them a feature in the local papers. And luckily, there were recordings. Surviving house moves and dusty lofts for nearly 50 years, the tapes finally made their way into the hands of Shagrat’s Nigel Cross, mostly due to a misremembering. Jill had wistfully imagined that Janice’s cousin Peter (who had a stereo reel-to-reel tape deck and permission to use his mum’s living room) was an engineer at the famous Trident Studio. He was in fact a civil servant living nearby in Barnes and taping was his hobby. Luckily, Nigel was still entranced by those amateur recordings, so the project took shape.

So here are some songs from a previously unreleased girl group in all their genuine and sweetly harmonised innocence. A snapshot of ’70s teenage-girlhood, an era predating TV talent shows and the internet. Along with traditional tunes “Sovey” and “Sinner Man,” are covers of Lesley Duncan’s “Love Song” (by way of Elton John’s version on his Tumbleweed Connection album) and an endearingly scratchy “Moonchild “(courtesy of King Crimson), plus six lovely original songs of happiness, sadness, love, loss, anxiety, hope, yearning. Yeah, all that teenage stuff.

The cover and inner sleeve are a collage of photos and ephemera with generous notes telling the story of The Folk Group/Saffron/Saphron/Red Amber – they never quite settled on a name – while the label (and badges) are by ace artist Savage Pencil. 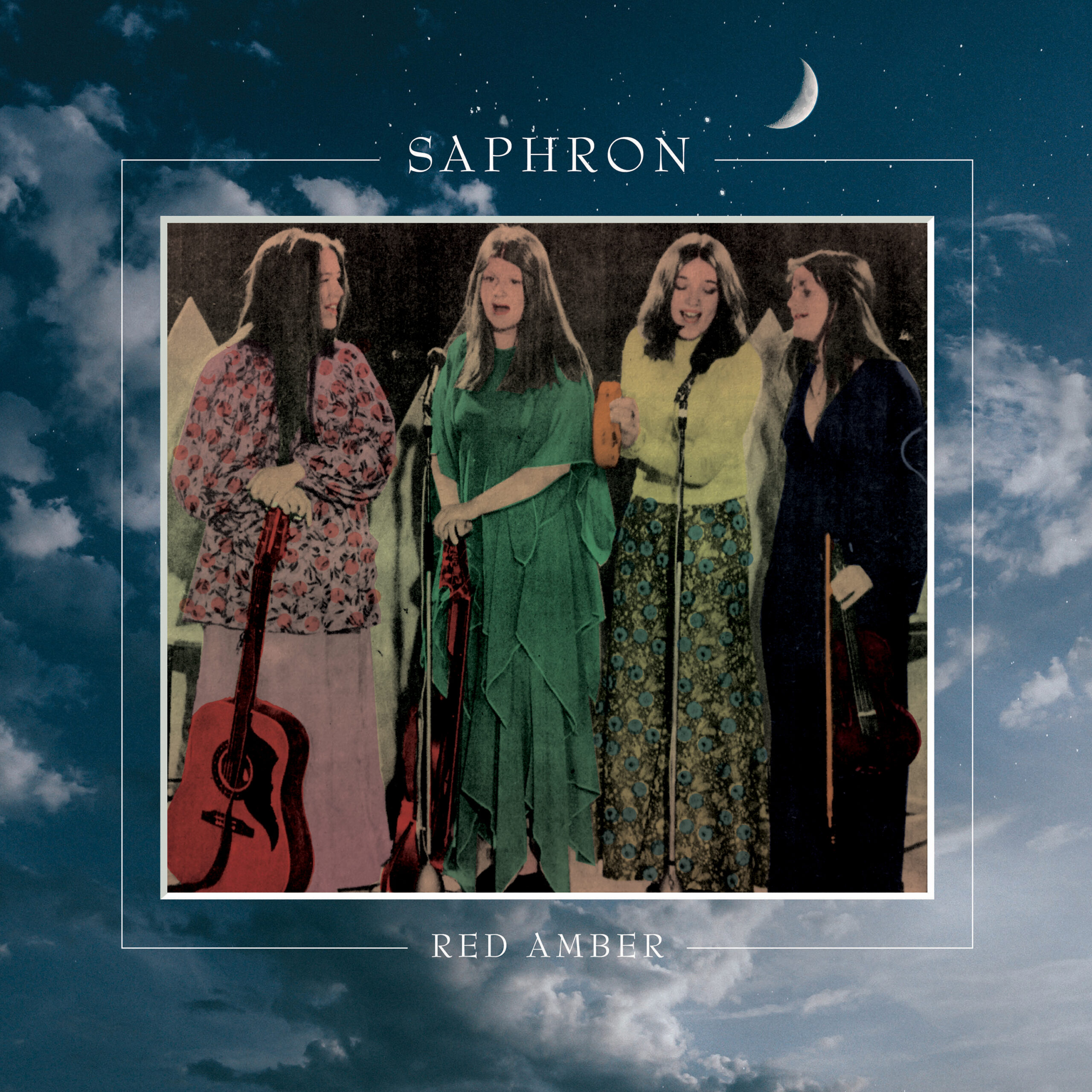