FOUND MY LAST BOX OF…

The fact that many label went in on releasing this LP might give you the idea it’s a loser, but that is a fucking lie. Mr. Trance has been well-represented by a variety of cassettes over the past few years, but this is his first vinyl souvenir, and it’s what the kids call “a record worth keeping”. Describing Trance’s one-man-band schtick and naif vocal presence always seem like they’d be annoying when they’re described to me, but I am here to tell you the opposite is true. Indeed, the more I hear Tracey’s casio/guitar/thumper attack, and his Poindexter-on-helium vocals, the deeper the elemental quality of his simply-wrought hooks burrows into my brain. The riff/lyric construction may put some in mind of Daniel Johnston’s early work, and I’m sure that was an influence on the guy, but most of the material here also has a lazy stoner surrealism that Johnston’s manic approach lacked. There’s no question but that Trance’s decision to work in this particular milieu is conscious and culturally-informed, but he still manages to invest the shit with a genuine weirdness that will not be stopped. – Byron Coley 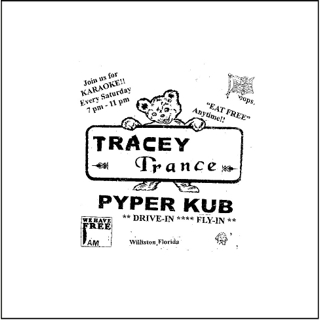