The No Wave era of NYC was a short dark flash of energy that was extinguished almost as soon as it was noticed. It happened so goddamn fast that if you missed the imaginal cut-off for inclusion by a few fucking weeks, you were forever written out of the picture. Believe me. Thurston and I wrote the book on this goddamn scene, and the Hi Sheriffs were just outside our temporal markers, despite the fact they’d played Tier 3, the Mudd Club and everywhere you’d think would matter. But look, they were as second gen No Wave as the Raybeats, the Bush Tetras and Eight Eyed Spy. If you have to ask why that was, and why such things were a matter of weeks rather than anything else, I dunno what to say. It’s just how it was, and we all knew it. Shit moved fast. The fact that the Hi Sheriffs were devolved from the Girls — the BEST band Boston ever birthed, as well as the only non-CLE band to ever record for Pere Ubu’s label, Hearthan — did not mean shit. They were perhaps only weeks to late to make the No Wave cut (something they’d immediately wanted to hit after the Girls played Tier 3 by Baquiat’s band, Gray), but hey — even Gray is a tad late for my taste. Still, musically, this quartet — Mark Dagley and George Condo from Boston’s Girls, Seth Weinhardt and Beth Fowler from RISD’s Bachelors of Art — blew my mind. I first saw them at Tier 3, and they were like a crazed version of DNA playing the blues. Mark brought the first single up to the NY Rocker office a while later and Andy recognized the cover he was doing, but I assumed it was all just blown brain originals. Little did I know. This album is mostly made up for pre-first single live and rehearsal stuff, and it is just the sort of raw madness everyone wants to hear all the time. Even Lydia Lunch liked ’em. She did not record with them until later — not long before she’d begin her Devil Dogs project — but even she knew she was beyond No Wave at the point of Eight Eyed Spy. It was a weirdly specific scene in many ways. But sonically, it bore lots of fruit. And one of the first, best and most blues wailingest of its proponents was the Hi Sheriffs of Blue. -Byron Coley, 2014 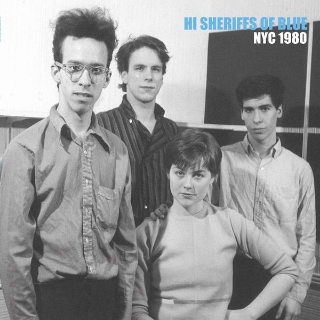