BeNe GeSSeRiT “MuLTiLiNGuaL SaD SoNGS, WeiRD JoKeS aND eXPeRiMeNTaL STuFF FoR uSe By GRoWN-uP CHiLDReN”  LP Edition of 300 with download

Back when Dennis Tyfuss was still a goddamn baby, Alain Neffe and Naine Bal were already staining the Belgian soul with recordings released under the Bene Gesserit moniker. But here we are in 2013, and now, finally, the first US vinyl issue of this material has become available for human consumption. The performing name may have been copped from one of those priestess/nun types in Frank Herbert’s novel, Dune, but Bene hews to none of the known priestess/nun-ic forms of sound. There are admittedly, some space-whispers, but they quickly resolve themselves into something more annoying/interesting, so they manage to feel a piece with the weird lashing out of this LP. Because, really, the basic thrust of the album is combative, maybe overly aggressive, even. Working on the assumption that normal sucks, Bene seems determined to take this motherfucker apart at the seams. Language, electronics, standard-type music — these are all mere tropes to be dismembered and re-sorted into some new type of standard. A standard that is oriented towards a discordant attack on standards, even when — at moments, anyway — it can sound as sonorous as a ride in a chapel-bound calliope. But wherever safety seems to lurk, there is a groaning troll somewhere underneath, a despot keen on wrecking easy pleasure and easy surcease. Bene create superbly disturbing music. That we have come to it so late in this country, is a typical oversight. But we beat Tyfuss. – Byron Coley, 2013 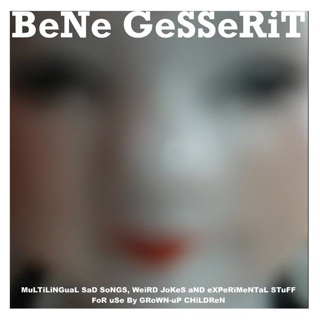