Bryan and the Haggards - Merles Just Want to Have Fun

It’s hard to know exactly what was going through saxophonist Bryan Murray’s head when he first conceived of Bryan & the Haggards, basically an avant-garde jazz ensemble dedicated to playing instrumental covers of tunes by Merle Haggard. Haggard is, of course, the author of such C&W classics as “Okie from Muskogee”, “Fightin’ Side of Me”, “Mama Tried” and other blasts of Bakersfield Baroque. Regardless, the Haggards first two albums were well received, making Wire’s Top Ten list and being lauded in places like the Village Voice. Now, for their third effort, Murray has enlisted the genius of Dr. Chadbourne — singer, banjo player, diehard C&W fan (see such previous efforts as LSDC&W for evidence). So this album has vocals, weird plucking and a great variety of the special madness Eugene brings to any project. The basic arrangements remain jazzoid, in our opinion the presence of vocals lifts the music to a whole new level. It’s a disarming combination, but the more you listen to it, the more you start to understand that this isn’t some odd novelty record, but is actually and ecstatic celebration of proletarian at its most lyrically feverish. Whether or not you give a shit about C&W, this album is guaranteed to paste a big grin on your mug. Enjoy yourself, pard. -Byron Coley, 2014 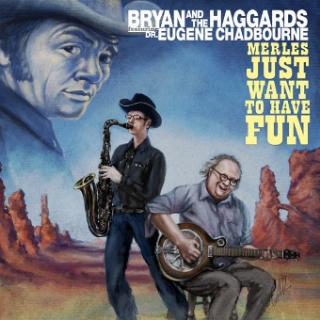