Printed Art by Ruth Garbus
Hand Painted by Ted Lee
Each Volume will be hand painted by a different artist.
Vinylization of the digital release by OSR Tapes
Available on YOUTUBE!

First vinyl volume (of five) documenting Chris Weisman’s amazing 88 song download session of 2012. The 22 songs here are classic ’60s-ist studio pop. Closest thing this particular sub-set of tunes resembles is a batch of early Nilsson demos or something. Songs he would’ve been trying to get the Monkees to cover on their TV show. The lyrics are not quite as arch as Harry’s were in those days, nor are there any novelty numbers here (thank Yod), but we’re willing to bet that if the Beatles had heard this volume back in ’65, then Paul might have said, “Our favorite American band is Weisman.”

This is Chris at his catchiest, and that is saying something. Beautiful melodies tossed off with lazy assurance, with words to match. Quite an incredible stash-peek. The arrangements are quietly tasteful for much of the set, but a few keyboard workouts have an elliptical oddness that might make true pop-squares squirm. They kinda sound like an unholy mash-up of early Daniel Johnston and Utopia-era Rundgren. Rather whacked, but I suspect that’s just part of the overall Weisman package.

The covers of each volume were hand painted (over a Ruth Garbus-drawn template) by a different visual artist. The brush this time was handled by Ted Lee (whose art was used for the last Lee Ranaldo LP), so each and every copy is unique. And as utterly captivating as the record itself. This volume also includes a 7” of three additional songs — two in a late-’60s Beach Boys mode, the other a keyboard stomp through “Greensleeves.” Why the single? Because 22 songs weren’t really enough to get a good head of stema going for the series. Now, it feels right.    – Byron Coley, 2015 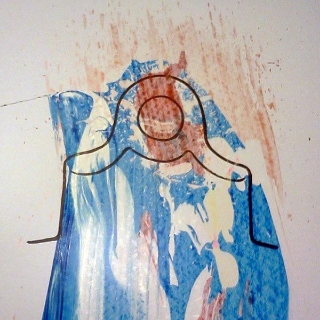