It has been eight long years since we’ve had a new duo album by Paul Flaherty and Chris Corsano. The two have played together in other configurations, but we all know there has always been something special and telepathic about their duo collaborations. From the moment they began playing together late in the last century, Paul and Chris communicated in weird deep ways. And so it is here. Low Cost Space Flights was recorded in June 2013, at Eric Gagne’s “Thing in the Spring Festival” in Peterborough, New Hampshire. And the duo wails through the three tracks. The room in which the performance happened has a nice natural echo, giving a sprongy edge to Flaherty’s lateral sax runs, while Corsano’s feverish percussion dives straight through every hoopsnake Paul rolls in his direction. No surprise. Chris is among the nimblest, most authoritatively athletic drummers to have graced the circles of fire music hell. And Flaherty remains, to my mind, a continuously under-rated player, largely because he’s so rooted to his physical place in the universe that is New England. His style slips seamlessly from freak register space-squeedling to bar-walk honkery to a sort of chess player’s motion-logic. Most of this set veers towards Paul’s harder-blowing end of the spectrum and we say “Halle-fuckin-lujah!” Leave the ballads to the bow ties, for now. Low Cost Space Flights reunites two great goddamn forces of the New England improv scene, and displays their playing at its hermetic, alloyed best. Beautiful Simon Bosse cover art. Great songs titles — “The Dog Paintings of George W Bush”, etc. What’s not to love? Besides lobsters, of course.

BANDCAMP!
EXCERPT FROM THING IN THE SPRING SET 2013! 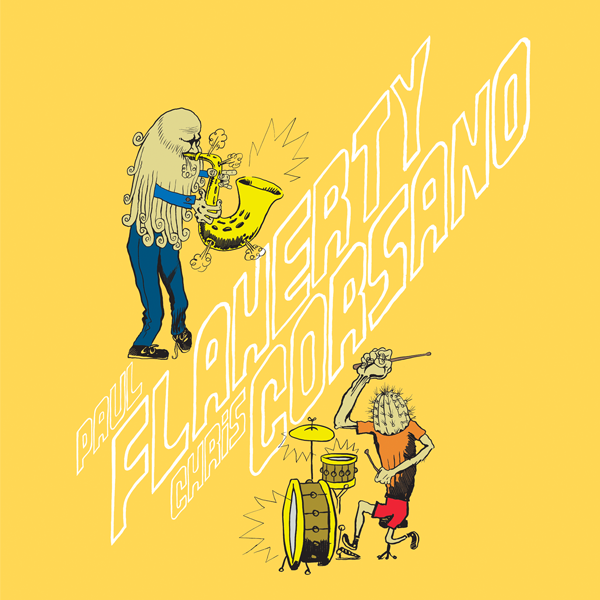