Guerilla Toss / Sediment Club - Kicked Back into the Crypt

Although the cover makes this look like there’s a goddamn Voi Vod reunion afoot, the sounds are a mighty pleasure to behear. This release pairs Boston’s amazing quintet, Guerilla Toss, in their most explosively whacked set yet, and NYC’s Sediment Club, a trio with literal blood roots in the late ’70s Lower East Side grunt scene. The Guerilla Toss side is a bit less high-pitched than previous efforts, and manages to create a bizarrely shifting clot of sideways-moving aural-mung that is obliteratively perfect. They craft and destroy riffs, rhythms and melodies faster than most bands can turn on their amps. Hard to figure out what exactly is they’re doing at times — whether it’s part of a thought-out process or just a random jumble of found parts. But the more you listen to it, the more their music achieves a strange holism. The patterns and parts actually fit together really well. They’re just moved around in much the same the way the early Boredoms jiggered popular logic — with personal calculus and great power. These guys will make yr tongue bubble like a whale. Sediment Club’s side is the best evidence they’ve yet produced of their wild syncretic power. Combining the rough stubbing of classic No Wave aktion with the warm mud of Lower Manhattan garage-blues, they’ve done everything Lydia Lunch attempted to do with the Devil Dogs. Somewhere between Mars, Rat At Rat R and the Chrome Cranks, Sediment Club make a beautiful noise that manages to function as both anti-rock and rock-qua-rock at equally high levels. Evil sounding beauty at its finest. Let’s hope for a long tour by both of ’em. 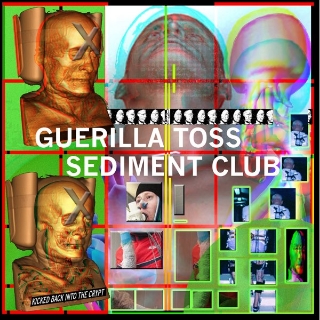