This one is only for the seriously disturbed and I don’t think any amount of hype will make you want this thing unless you know exactly what it is. That being said, i will attempt a description for those who haven’t come across the world of Kommissar Hjuler (44 – an actual German police officer) and Mama Baer (30 – his wife, collaborator and mother of their two children Faust Adolf and Cy). The couple have created a body of visual, audio and performance work that has drawn the attention of many in the international art establishment and left others scratching their heads. With it’s hearty mix of sound poetry, musique concrète, absurdist performance and pornography, the couple’s music is not always an easy sell. Add to that the groups discography, which is approaching the 300 count, and it can become difficult to separate the wheat from the chaff. That’s where Feeding Tube Records comes in. Anyone who heard our first LP release for the group, “Amerikanische Poesie und Alkoholismus”, knows that we are far from scrapping the bottom of the Hjuler/Baer catalog. That album was a vital sound poetry work for the 21st century, if there ever was one (a 21st century that is). “Jacob und Wilhelm Grimm”, loosely based on the classic fairytale, is a no less important work and if you believe the Kommissar himself, “This is the greatest record of the century”! 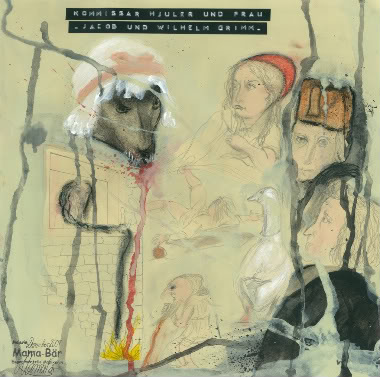