This trio — Devin Flynn, Gary Panter and Ross Goldstein — has delivered one of the most blinding psychedelic listening experiences of the last several anna. Only one of these darlings — Ross Goldstein — is known primarily as a musician. Gary Panter is one of our era’s premier visual artists, and Devin Flynn is among the age’s most berserk animation stars. But they have nonetheless managed to blast their way into he very center of a psych-specific cosmos that will make your fingers feel like sausages and your ears wobble as though they’re on stalks. The band has one prior record, the excitingly primitive Four Corners Bounce on Pete Nolan’s Arbitrary Signs label, but they truly arrive with Honeycomb. Opening with a gorgeous bloot through West Coast Pop Art Experimental Band’s “Smell of Incense” they set a high bar, which they manage to hit every leap, no matter how cartoonish Gary’s voice sounds at times. They also manage to burn through killer versions of Family’s “See Through Windows”, Henske & Yester’s “Farewell Aldebaran” and a bunch of other monster ’60s brain ticklers, as well as coughing up their own material in way that makes you think you’ve heard it somewhere before. It’s a totally whacked effort, ending with a piece of spoken spuzz that demonstrates what it would be like to go to a Star Trek Convention, very high on bad acid, wearing cartoon hand puppets. Completely befuddling! Comes in an eye-toasting full color gatefold cover, with insanely tricky graphics. You will be so glad you got this album you’ll be thanking everyone on your street. For days.
-Byron Coley, 2014 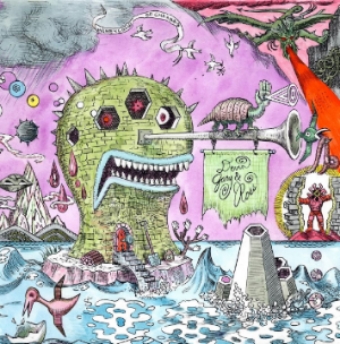