Here’s a superbly tossed posthumous release by Brattleboro’s recently disbanded Brattleboro brain-pop duo, Blanche Blanche Blanche. Sarah D. Smith and Zach Phillips were the project’s drivers, and this single is a demonstration of why we love em so. Both tunes are covers, recorded in 2010, previously available in only the sneakiest of ways. Now, both tunes may be easily played (and played with) by human hands. And that is a good thing. Their version of T’Pau’s “Heart and Soul” gets full Brat-pop treatment, exploding across the landscape like an over-inflated snack-bladder full of the sweetest cheese imaginable. Their take on Royal Trux’s “Map of the City” can teach anyone a few tricks about diffuse planning and oblique strategies. They both also sound great. It is with great excitement (tinged with a certain nostalgic twinge) that Feeding Tube brings you this RSD treat. Have a nice picnic. -Byron Coley, 2014 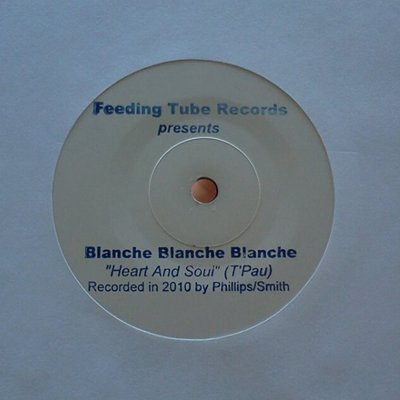