Unlike the last Bang! Bros. record we did (12/12/12, FTR170), this one’s frilly style was not dictated so much by a date as by time. According the jacket’s notations, it was recorded in less than an hour in October, 2016.

What? You might cry. What kind of a goddamn record can be recorded in under an hour? We’d like to point out that such live classics as Metallic K.O and Mars Live at Artists Space were recorded inside those temporal parameters. Futhermore, we should point out that Bang! Bros. are a duo who live by the rules of real time interaction. They do not attempt to step in the same river twice. Theirs is a journey that leads only in one direction — ever outward!

The pair of musicians who are the Bang! Bros. (Mark Johnson and ARKM Foam) make a huge effort to always assure their attempts to manipulate electronic splint-chutes of all manners are observable as live events (observed either by eye, nose and ear, or ear alone). In the case of recordings, we are asked to accept the word of these gentlemen that their output is of the living variety, but they have never given us reason to doubt them, so why should we start now?

The music on Hard Rocks Vol. 21 (only a few other volumes of which I have had actual access to) is the brilliant, spaced and sprongy, fast edit head wrench we have come to expect of the Bros. It delivers what I’d dare say is a full month’s worth of confusion in just over thirty minutes. In this sense, it will be an incredible time-saver for many of us. Let’s just get all that confusion jammed in, then we can do some chores!

One can only hope that the cartoon on the back of the jacket — in which Sam Gas Can suggests the Bang! Bros. will go and live in the jungle and forget to eat — is just his idea of a sick joke. I mean I dunno about you, but if I had to spread my confusion out over the whole month, I’d be well and truly fucked. 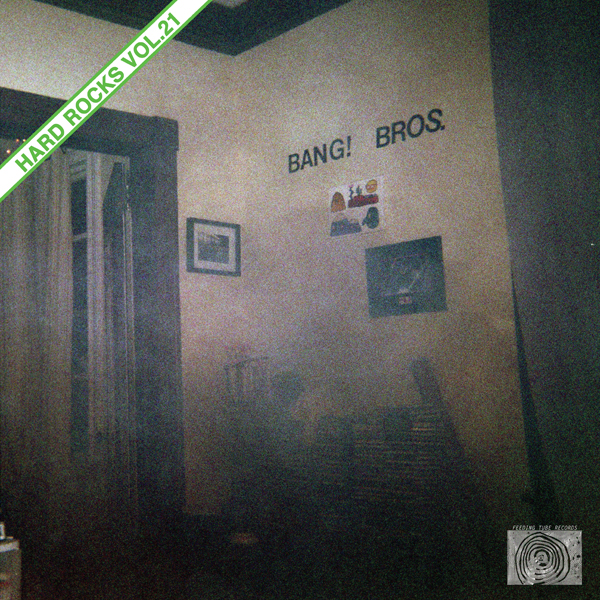