Liner notes by Lisa Crystal Carver & Brett Robinson Brett asked Lisa to perform at his birthday party because he is a fan of all things Suckdog and Rollerderby. She agreed, and taught a bunch of people how to paint the soul of a stranger. She also painted a portrait of Brett for him since it was his birthday, which you can see on the back cover of this LP. Also for the party, Lauri made really awesome stickers that said “Fuck Brett (in a mean way)” and “Fuck Brett (in a nice way)” on them. Not only is Lisa proudly wearing her stickers and showing some tasteful cleavage on the cover of this LP, but each LP includes their own stickers for you to adorn yourself with! Lisa’s painting instructional class was bookended by the musical acts captured on this LP. Side A features various Egg, Eggs members in alternative (Oh! Scandalous choice of word!) band configurations. Kick it off with the guitar/violin bliss of M00SE (second performance ever!) followed by the synth/uke/waking-nightmare assault of Big People Band (their one and only performance to date). Brett was physically assaulted during the latter performance, much to one of the Big People’s dismay. Brett didn’t really mind, after all it was his birthday and all of the violence was committed out of love. Side B of this LP turns the attack to the listener as Belltonesuicide and Diagram A, two of the heaviest bonescrapers in western Mass, conjure up aural destruction fueled by passionate and Pabst. Full-color, eight-page booklet includes text of Brett soliciting Lisa’s services and Lisa’s subsequent assessment of the soiree, plus performance photos. 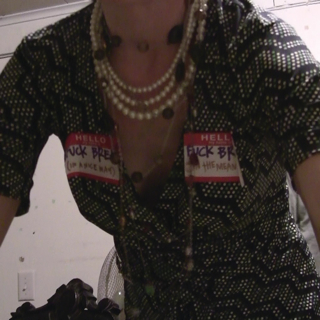