First vinyl outing by Fat Creeps, a Boston area trio (Lynn, Mass, actually), who have been brilliantly assaulting local audiences for the last year and a half. Like Montreal’s No Joy, Fat Creeps combine guitar tones developed specifically for shoegazing, with a garage-pop sensibility that will not be stilled. Vocally, I am also reminded of Barbara Manning’s classic early solo work (about the highest compliment I can offer), and there’s a great friction between alternating layers of lassitude and energy. This makes for a coarse and classic blend, sure to be gobbled like ear-candy by anyone who wanders anywhere near the disk. As Bryan Ferry might say, “Marvelous.” On the flip is new spamso-outsider-rock-aktion by Zebu! — a duo (with guests) (with privileges) who seem utterly dedicated the dissolving genre walls in a gush of pearly abandon. This outing has the same roots-ripped sax that blasted through the center of Chill Wave, and even adds some female vocals (c/o Meredith Thomason) that provide an unusual shine to “first track”. The rest is the howling, rhythm-whacked splooge we have come to expect of the Zebu! experience. Piles of guitars, drums and creepy vocals, teetering on the edge of your doorway, threatening to destroy your equilibrium forever. Nice 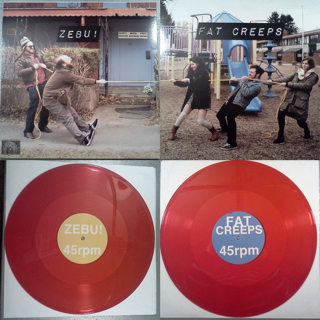