The third album by Brattleboro’s Great Valley, who walk as equals amongst the woggly dream pop giants from the charted region of the upper Connecticut River Valley. Like their brethren, Happy Jawbone (a member of whom surfaces hereon), Great Valley concoct a strange type of pop music, with certain similarities to musicians as disparate as California’s Van Dyke Parks and Pennsylvania’s Strapping Fieldhands, without yielding a single woof of their Brattleborian distinction. Blanche Blanche Blanche is also represented here by Zach Phillips, but Great Valley’s take on the Southern Vermont ethos remains unique. Much of the sound on Continental Lunch has a pointedly ruralist base. Individual notes could be credited to ZZ Top or even members of the Capricorn Records cabal, yet when you engage with the entirety of their sound there is little chance of confusing them with anyone else. Their craft in creating a murky, muddled wall of sonic puh is strange, meaning it’s far from usual. Instrumental passages have the crudeness of a carnival band, but these link with vocals bearing the lush potency on any mock-Beach Boys hybrid you could name (even the Rip Chords), albeit with a post-punk compositional modernity that buggers easy comparison. Every song on the album here shifts mood and mode as handily as Tura Santana shifted her hips in Faster Pussycat. There are odd blips of neo-electronic-pop, which’re immediately subverted by drunk sailor vocals. There are pieces of Matt Valentine/Neil Young vocalize that implode of their own volition in a shower of warm swallowed sputum. There’re blurts of patented ‘Boro ganged chorus parts that refuse to stop acting drunk. If this is not one of the most low-keyed balloons of berserk psych blow-uppery, you should give me a list of other contenders. Because you are wrong. The more you listen, the wronger Continental Lunch is. What could be a higher compliment? 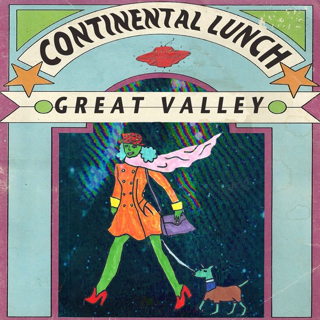