Herewith is an extraordinary 45 RPM album of solo electronic music by NZ’s great contrarian, Bruce Russell. The pieces were all created using machines built by Clinton Williams, whose musical work under the OMIT monniker has long been championed by Bruce.

Unlike many of Williams’s own recordings, which contain kosmiche extensions recalling the ’70s work of Klaus Schulze, the 15 improvised Sonatas presented here mix a few of those sorts of sonorities with a variety of more harshly-edged tones. There are also post-techno references recalling the work of folks like Scott Foust and Stefan Jaworzyn, in addition to the artists to whom some of the pieces are dedicated — musicians Ralf Wehowsky and Martin Rev — as well as philosopher Paul Feyerabend.

As with much of Russell’s music, the music’s surface feel is restless, ornery and questing. The pieces often feel as though they were devised while attempting to answer specific questions or notions that Bruce was wrestling with. But as always, one suspects some pieces are just pure fuckery, for which a conceptual framework was built ex post facto. Or not.

Regardless of intent (and/or imagined intent), Russell has come up with another album that ends up being both about itself, and also about something big and conceptual that keeps fidgeting just outside my brain’s grasp.

The best approach may just be to dive in a float around in this eceellent music. Context be damned. Because, really, sometimes a Sonata is just a Sonata. Y’know?

For sales in AUS/NZ go to Bruce Russell’s Bandcamp. 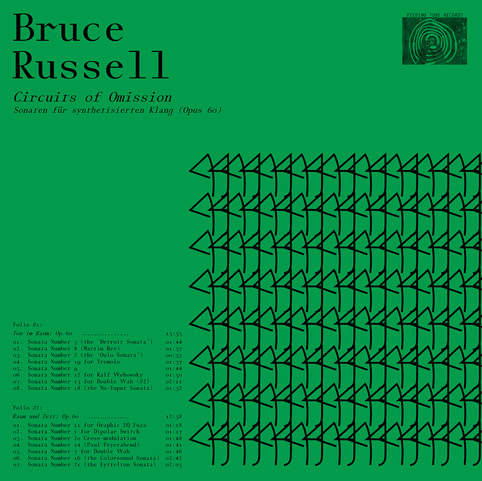