Vinylization of the superb oddball cassette originally issued by the Potlatch I Gather Tapes label in 2008. Ambergris is more or less the solo project of visual artist, Matthew Thurber (1-800 MICE, etc.), although he is aided in this instance by Rebecca Bird. The suite of songs presented here is something like a theatrical recreation of one of Thurber’s bizarro world comics. Using voices, Casio, various Garage Band inventions and his own surreal imagination, Thurber takes us to a 10,000 year class reunion of the students of a space/art/science academy, from which our hero may have been physically expelled some millenia earlier. The first side focuses on the storyline, with music taking an incidental role. Something like the radio plays of Firesign Theater, it gets more brilliant as your high intensifies. The flip contains songs, which have a vague similarity to some of the antic bands of the SF underground of the mid-1980s, if they had recorded themselves in SF’s legendary Musee Mecanique. Housed in a lovely silkscreened cover of Thurberian design, Anti-Matter Alma Mater is the best of comics-based music to have traveled our way since Gary Panter’s last LP. Truly whipped. 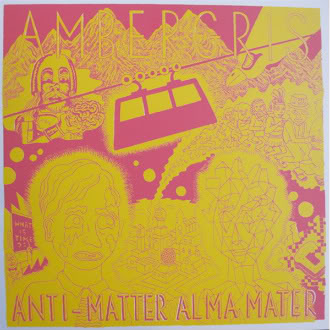