Julia Reidy - All Is Ablaze

Recently we touched base with the New Zealand ex-pat guitarist Dean Roberts. He’s living in Berlin these days, teaching, playing and staying out late. When asked if there were any interesting, unheralded players we should know about he immediately mentioned Julia Reidy.

Julia is also a guitarist currently based in Berlin, but the city from which she’s apart is Sydney, NSW. While there she was embroiled in the Australian improv scene, and played with the likes of Jon Rose et al. She was focused exclusively on electric guitar back in those days. Since relocating to Europe she has split her concentrations between electric and acoustic, playing in two duos —  Tennis of All Kinds (with bassist Adam Pultz Melbye) and PALES (with percussionist Samuel Hall) — among other settings. On All Is Ablaze Ms. Reidy plays both an acoustic 12 string and an electric, both of which sound unusually raw and exciting in her hands.

Each side of the record consists of a single piece, the A is “All Is Ablaze,” the flip, “Thatched Steel & Rain.” In his notes, Dean writes about the beautiful contrasts of the music’s textures, drawing apt comparisons to everyone from Robbie Basho to Tom Cora. As these namechecks might suggest, Julia’s first LP embraces a nearly unknowable field of sonic detailing. Her technique can sound precise and smudgy at almost the same moment. The intent of her journey seeming to shift with her breathing patterns.

There is an organic depth and weight to the music here, displaying an exceptionally wide breadth of influence, knowledge, chops and imagination. We would like to thank Mr. Roberts for introducing us to the music of Julia Reidy. You will soon be doing the same.   -Byron Coley, 2017 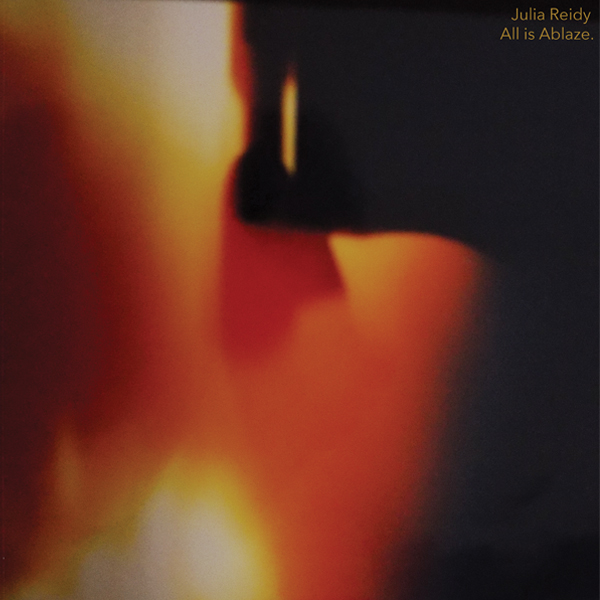