The tradition of Christmas albums is at best a mixed bag. Naturally, this means there have been a decent number of fine disks releases in the genre, but they are few and far between. Blowfly’s Christmas Party, Bob Dylan’s Christmas in the Heart and the Poison Idea/Ray & Glover Single at Christmas are obvious gems. But there are far more losers than winners hiding in the stacks of any store’s Xmas section. Thankfully, Vermont’s Happy Jawbone Family Band have decided to make their “Santa play” this year, and the results will make any Noel a hell of a lot more Joyeux. The album plays like one of Eddie Gorodetsky’s legendary Christmas mixes, splicing together songs, spoken bits and weirdly-sped-up routines into a blend as thick and rich as any eggnog. Jawbone’s own tunes maintain their uniquely bizarre take on pop constructions, reminiscent at times of the Strapping Fieldhands or some of New Zealand’s ‘80s greats, while never sacrificing their evil backwoods gleam. Great stuff. And way they intersperse the other shards are confounding, primitive and as satisfying as a Soupy Sales/Three Stooges hybrid. You’ll be tempted to pull this rascal out of its stocking to play during other seasons of the year, but we suggest you save it for Yuletime use only, thus assuring its surprising pleasures keep you on your best behavior during that time of year when The Big Guy is looking on most closely. Don’t forget — he knows when you are sleeping; he knows when you’re awake. Forewarned is forearmed. Happy Jawbone has provided all the protective coverage you could ever ask for. 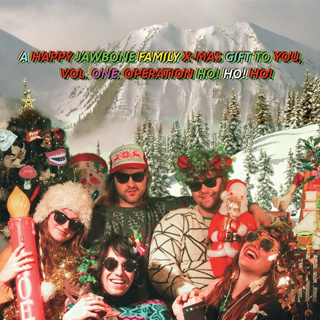